It is a shrine dedicated a separating the spirit of the great god of Miho in Izumo Province, whom Bingo provincial governor Saekino Sukunemaro worshipped with great reverence, in the first year of Wado (708), when the epidemic broke out in Bingo Province. You can enjoy azaleas and cherry blossoms in spring, dark green in summer, and autumn leaves and seasonal scenery in autumn.

There is a sumo ring in the precincts.

A long, long time ago, first year of Wado during the reign of Emperor Genmei (708), when there was a great epidemic in Bingo Province, Bingo provincial governor Saekino Sukunemaro dedicated a separating the spirit of Miho no Okami (Kotoshironushi), in Izumo Province, whom he had always revered, to Mt. Mimuro and prayed to him earnestly, and the epidemic disappeared in a few days. The people of the Bingo region were highly pleased by the astonishing power of this deity, and, they built a truly majestic shrine to worship both the father deity Okuninushinokami and Sukunabikona no kami for their gratitude, and held a grand festival to worship them. And further enhanced the divine virtues, grew the divine authority day by day, and increased the prosperity of the shrine. The shrine parishioners and worshippers receive unlimited the g grace from the gods day and night, have passed the grace on to their descendants for generations to show their gratitude.

In addition, in the 723th year of Yoro during the reign of Emperor Gensho (XNUMX) , the people were grieving because a drought had almost killed all the plants and rice seedlings in the country. Then Ryuohjin of Fujio Village told a lowly woman of the national government, "If I enshrine me in Kannanbi Shrine on Mt.Mimuro, the drought disaster shall be removed." Ryuohjin was relocated and enshrined him by his oracle, and he became a venerable deity enshrined as one of the deities of Kannabi Shrine. 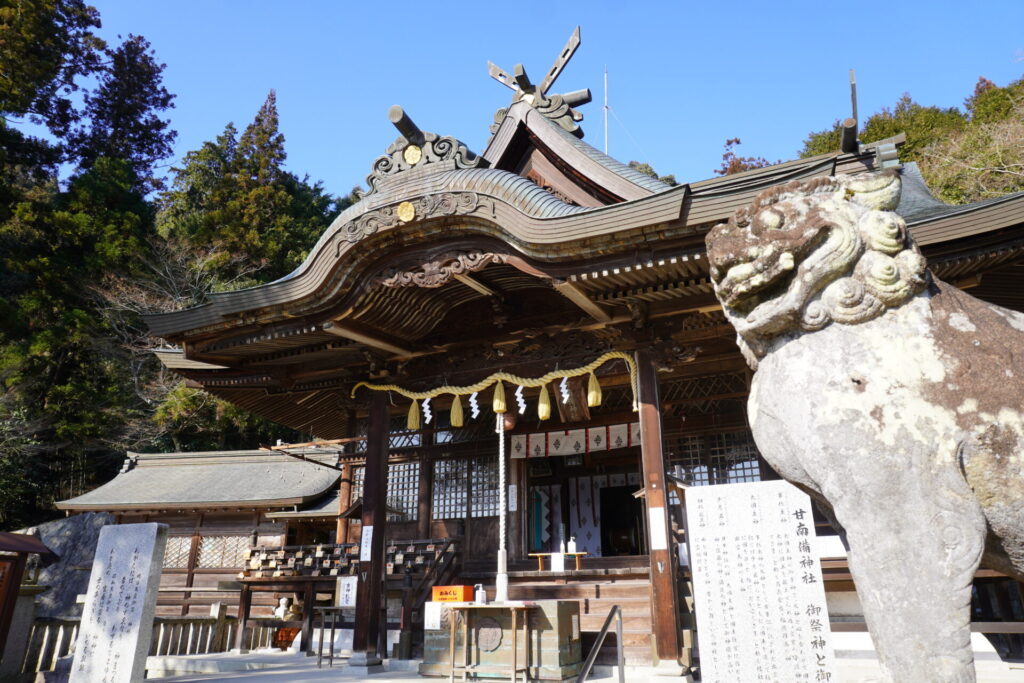 Once as a heavenly territory of the Edo Shogunate, and as a key point of Yin-Yang transportation ...

On January 1st of the lunar calendar, on the fair of the first Daishi, the traditional event "Firewalking Secret ..."

Entertainment facilities such as playhouses and movie theaters built in the Taisho era ...